Bern is a medieval city that has changed little structurally since 1410 when a law was passed, after a fire that burned all the wooden buildings, that decreed all buildings be made of stone.   Of course the old city now has contemporary shops and is connected by buses and trams to the new city, yet still, it retains its original character.  The four main thoroughfares of the old city are covered in cobblestones and because the available stone, limestone, is porous, the eaves extend out farther than usual.  Awnings that originally covered the carts of vendors have been assimilated into the architecture so that the walkways are now covered, forming arcades on either side of the streets. 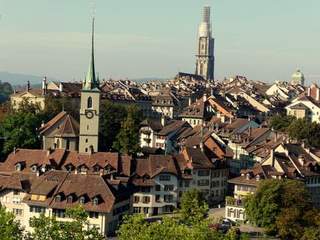 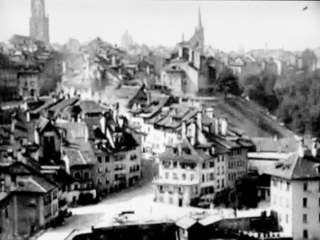 As you can see, the city remains much as it was, including a series of eleven fountains, each centered around a painted statue, where women in 1901 without running water assembled to do washing. 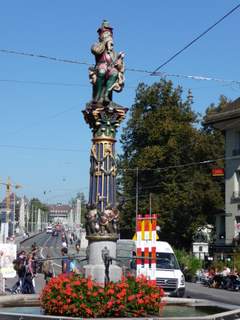 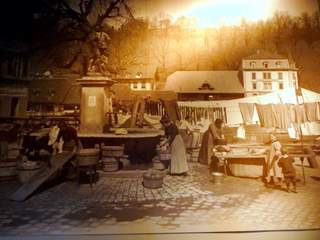 Bern is where Albert wrote the five papers that established his reputation in the year 1905, his anus mirabilus, while he was working full-time at the Bern Patent Office, newly married (1903) to Mileva, and soon-to-be the father of Hans Albert.  In his memoir, he records that these were the happy years.  (Interesting that happiness is reported BEFORE the success for which he is famous.  Hemingway also claimed the years before his acknowledgment, when married to Hadley Richardson, were his happiest.)

The apartment where Albert and Mileva lived when they were first married has been preserved as a tiny museum in two floors, those being what we would call the second and third floors. 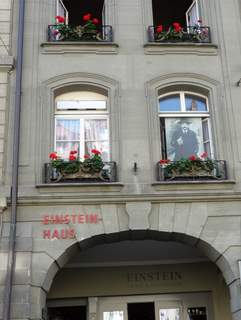 You first enter two rooms of their apartment, one with a tiny fireplace and Albert’s desk from the Patent Office added, the other with table, chairs, grandfather clock, and photographs.  All are wood and quite beautiful.  The desk is the kind with cubbies, each filled with Albert’s belongings. 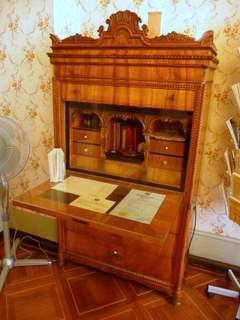 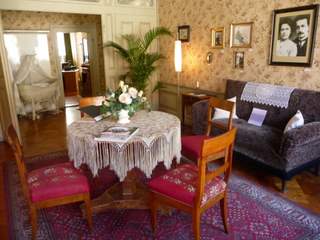 Between the two rooms in a little foyer is a closet with what appears to be Mileva’s wedding clothes and Hans Albert’s bassinet.  While it might be possible to look at period furniture dispassionately, the fabric of the clothing and the bassinet connected me to the real family. 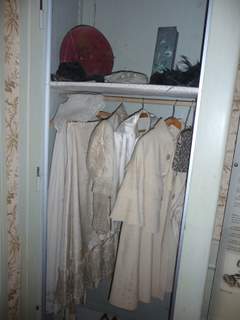 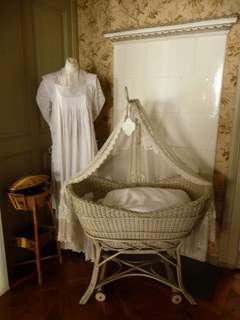 Up the original staircase is a room full of information about Einstein, all of which was familiar to me from reading biographies.  It was my husband’s first initiation into the various particulars, so worthwhile for his participation and interest.  (No, I don’t discuss my day’s work with him beyond whether it went well or haltingly.  Though peculiarities in the research might come out, he doesn’t get the full gestalt until a trip such as this one or when reading the published book.)

The real treasure trove of content is in the Historical Museum here in Bern, housed in a castle and devoting an entire floor to Einstein.  With video demonstrations, newsreel, photographs and artifacts, the museum recreates the context of his work, his life, his legacy. 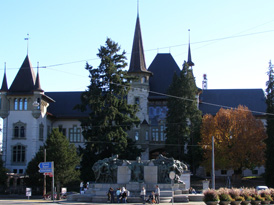 The Theory of Special Relativity is explained in animations, step-by-step, on four screens, the viewer able to rewatch each one as many times as necessary to understand the concepts.  This is the theory that presents the speed of light as the constant, and not space or time, as was previously thought.  As a writer, I’m struck with how much of grasping the concept is the same as understanding point of view.

The artifacts that were of greatest interest to me were those that demonstrated the particulars of daily life.  Seeing the heavy iron Mileva would have used, the telephone on which Albert might have called his mother, the stove that heated the rooms and old films of the trolley cars made the reality of their lives more palpable. 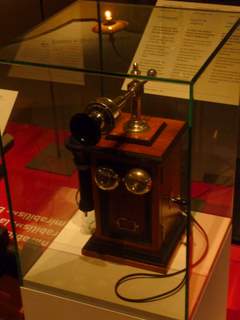 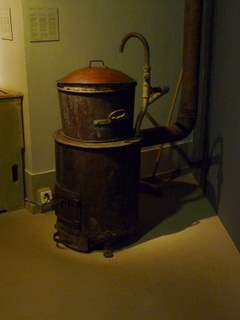 There were several rooms set up–a bedroom like where each lived in Zurich while in school, a store where Mileva might have shopped in Bern.  Such exhibits prevent me from imagining/writing their lives in a 21st century, revisionist way. 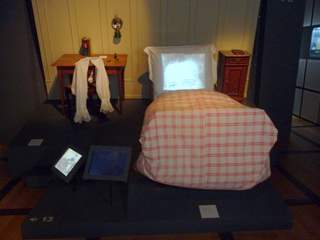 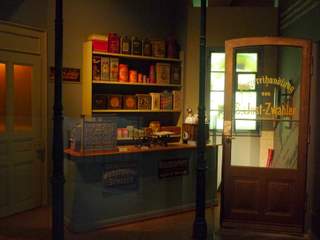 Three facts I didn’t know emerged:  Einstein’s father’s company was commissioned to light Oktoberfest with electricity–suggesting that Albert might have attended, especially the year it was first completed.  I can imagine the  moment of flipping that switch and seeing the grounds lit for the first time would be quite a sight.

I also learned that despite being aware that he was not a good marriage partner, Albert fell in love again in old age, after Elsa’s death, after his platonic relationship with his secretary Helen Dukas.  His inamorata was a Princeton librarian, Johanna Fantova, aka Hannie, also a European refugee.  He wrote her love poems like those he wrote to Mileva and liked to take her sailing–a lifelong passion akin to playing his violin.  Fortunately for Hannie, they didn’t marry.  He bemoaned in his memoir that he failed miserably at marriage.  Twice. 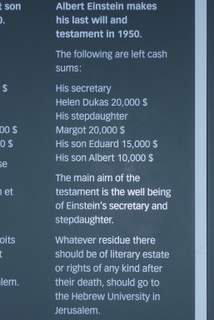 Finally, I saw the will above.  Mileva and Elsa were both dead before he died, so he provided $20,000 for his secretary, Helen Dukas, $20,000 for his step-daughter Margot (Elsa’s daughter), $15,000 for his son Eduard who was hospitalized in a psychiatric institution in Zurich, and $10,000 for his son Hans Albert, a hydro-geologist in California.  Any remainder, including all proceeds from his literary estate, was left to Hebrew University in Jerusalem.

I will leave those numbers alone.  They speak for themselves.

Professionally-speaking, Nancy Pinard is an author-educator who spends her days writing, teaching, reading, and researching for her writing and teaching. She is the author of two published novels, Shadow Dancing and Butterfly Soup, and numerous short stories. She has taught the craft of fiction writing in many venues including Sinclair Community College, University of Dayton Life-Long Learning Institute, Antioch Writers' Workshop, Mad Anthony Writers' Workshop, and Molasses Pond Writers' Workshop. Personally, her faith is what sustains, inspires, and motivates her to continue to explore meaning through literature. "You are right in demanding that an artist approach his work consciously, but you are confusing two concepts: the solution of a problem and the correct formulation of a problem. Only the second is required of the artist."  Anton Chekov to Alexei Suvorin, October 27, 1888
View all posts by Nancy Pinard →
This entry was posted in Anus Mirabilus, Bern, Eduard Einstein, Einstein, Elsa Einstein, Ernest Hemingway, Generating Fiction from History and/or Fact, Hadley Richardson, Hans Albert Einstein, Helen Dukas, History Museum, Johanna Fantova, Margot Einstein, Mileva Maric, Oktoberfest, Special Theory of Relativity, Switzerland. Bookmark the permalink.