Einstein spent his childhood from age one to fifteen in Munich, though the Munich of today is a reconstruction of the city, thanks to Munich being the Nazi headquarters and therefore the target of Allied bombs in WWII. When it became apparent to Hitler that Munich would fall, he didn’t move the art work out of the cathedrals because he felt it would demoralize the population. Instead, he had everything photographed. From these Nazi photographs the old city was reconstructed so that in the Alstadt, much appears as it did before. 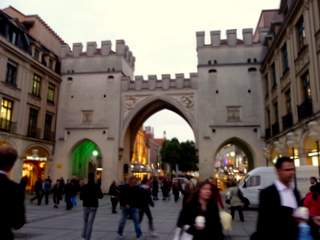 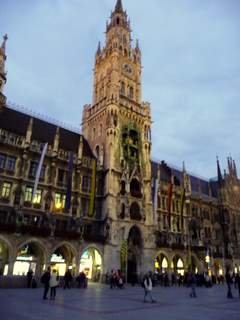 The two gates that remain from the medieval city are the Isator and the Sendlinger Tor. Both Einstein householdshis parents moved farther out of town as the business prosperedwere near the Sendlinger Tor, so I was particularly interested in what a child could actually see from there. In the opening scene of my novel, Einstein is a three-year-old, left by his mother in the city to find his way homea practice she was committed to in building his independence. This is fact, but how he learned to find his way home is a matter of fiction. Originally, I imagined that he oriented himself by the towers of the Fraumunster Kirche, but standing at the Sendlinger Tor, I realized that these towers, high as they are, are not visible. As if to oblige me, there stood a child, a little girl of about three, and through her eyes it was apparent that I needed to revise the scene so that three-year-old Albert would orient himself by the Tor itself. 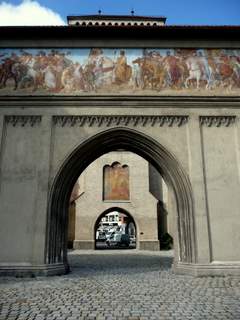 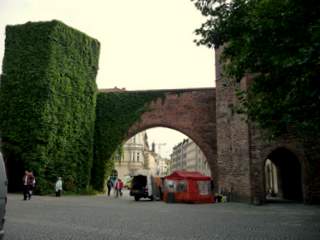 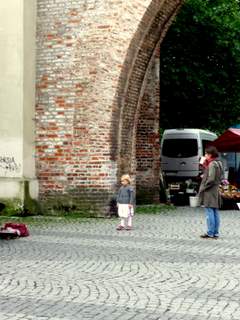 I also sought out the Luitpold Gymnasium, the high school that Einstein attended, hated, and from which he arranged to be dismissed at age fifteen when his parents moved to Milan and left him behind to finish school. (He had a dual purpose. Not only did he hate the militaristic German educational methods, but if he did not revoke his German citizenship before age seventeen, he would be obliged by law to serve in the German army.) The school itself looked too new to be over one hundred years old, which leads me to believe that it was rebuilt after the war, the school he attended possibly having been destroyed. This is a subject for further research. 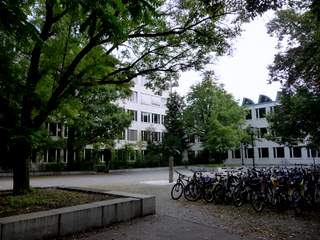 It happens that Munich is celebrating Oktoberfest during our stay, though, unlike four million people annually, it was not the purpose of our coming. Oktoberfest is the annual celebration of the wedding feast of the long-dead King Ludwig I and has continued since 1810.  That means Albert might have attended as a child.  My husband and I took a stroll through the celebration, an immense fairgrounds full of the most hair-raising rides I’ve ever seen, plus booths selling wurst, very fishy-smelling fish on a stick, pretzels, and decorated, heart-shaped cookies worn on a string around the neck by both men and women, all dressed in traditional Bavarian costumes. The main attraction, however, seems to be the ubiquitous beer halls where hundreds pack in to get drunk, sway, and sing both American and German songs, loudly, to the music of an oompah band. 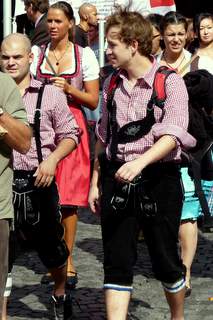 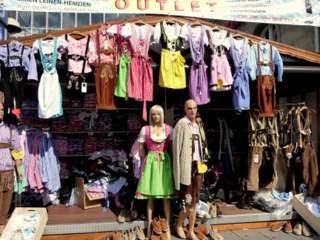 After a several mile circle of the grounds at 6:00 PM, having sampled nothing, we were driven home in a bicycle-powered, two-seat carriagethe vehicle of choice in the car-and-taxi clogged roadways. The driver told us that to get a seat in a beer hall, one had to go at 10:00 AM. Since Albert Einstein was an introverted child who preferred building houses of cards, watching chickens, and proving the Pythagorean theorem, I suspect he might have been as anxious to leave as I was. Furthermore, he didn’t drinkhe claimed it made one stupidand while not a teetotaler myself, after seeing Oktoberfest, I’ve no doubt he was right.

Professionally-speaking, Nancy Pinard is an author-educator who spends her days writing, teaching, reading, and researching for her writing and teaching. She is the author of two published novels, Shadow Dancing and Butterfly Soup, and numerous short stories. She has taught the craft of fiction writing in many venues including Sinclair Community College, University of Dayton Life-Long Learning Institute, Antioch Writers' Workshop, Mad Anthony Writers' Workshop, and Molasses Pond Writers' Workshop. Personally, her faith is what sustains, inspires, and motivates her to continue to explore meaning through literature. "You are right in demanding that an artist approach his work consciously, but you are confusing two concepts: the solution of a problem and the correct formulation of a problem. Only the second is required of the artist."  Anton Chekov to Alexei Suvorin, October 27, 1888
View all posts by Nancy Pinard →
This entry was posted in Einstein, Luitpold Gymnasium, Munich, Nazi headquarters, Oktoberfest, Research methods, Sendlinger Tor, writing. Bookmark the permalink.