It poured rain on our first day in Zurich and was the Swiss equivalent of Thanksgiving Day, besides.  Of the main churches, the Grossmunster was closed for a vocal concert, the Wasserkirche for services, and St. Peter’s Church for a string ensemble.  We did see the Chagall windows in the Fraumunster, (stunning, but not there in 1901 as Chagall was only fourteen and executed the commission when he was 80) and hear an amazing soprano sing for coins in the portico of the Wasserkirche. 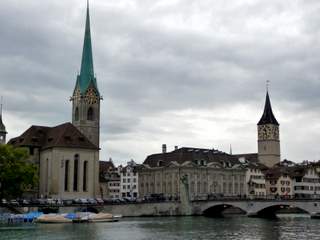 Apart from the rain soaking through my raincoat, Sunday was the perfect day to go searching out specific Einstein sites.  I wanted to see the house where Mileva lived with her Eastern European countrywomen at Plattenstrasse 50 and also the room Albert rented at Unionstrasse 4.  I had seen both on the internet courtesy of Google Earth, but seeing them live was a different matter, like the difference between watching an opera on television or in a theater.  The rain did not dampen my enthusiasm for looking up to the fourth floor of 50 Plattenstrasse to the three windows that mark the only room up there.  This was Mileva’s room after she and Albert got together–for privacy, no doubt, though it meant climbing more stairs with her congenitally displaced hip and possibly having to descend a floor to use the bathroom.  She didn’t mind, apparently, though her housemates complained that she was unavailable to them once Albert came on the scene.

The building is stucco, painited gray, quite plain, on a street of old trees, sidewalks, and other more distinguished-looking houses with shutters.  The paint and the age of the trees might be different, but those three windows on the fourth floor suggest a large room up in the tree tops, a pleasant, light-filled nest for the two of them.  Strangely, given Albert’s mother’s antagonism for Mileva and her fear that Mileva would get pregnant, she sent care packages for Albert to Mileva’s address. 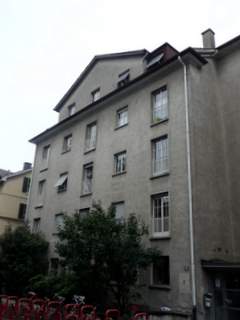 It was more difficult to find Albert’s room.  Unionstrasse is a tiny cul-de-sac which requires pinpoint navigation among a maze of streets.  A cooperative Swiss citizen helped, directing me in a combination of gestures and broken English.  The Swiss speak very good English–much better than my German–but the word cul-de-sac is not parlance learned in school.  Nonetheless, she managed to direct me to a lovely tree-lined street, and there was number 4 on the corner, buff-colored stucco building.  A plaque on the wall confirms that Albert Einstein indeed lived there.  An architect now has an office in the building.  I hope s/he feels particularly inspired. 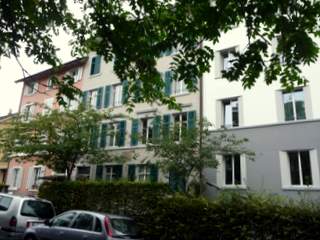 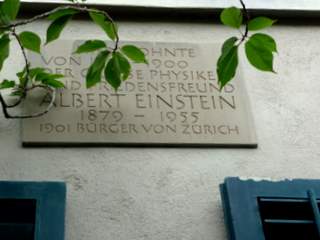 From there I climbed farther up Ramistrasse to the ETH, the Polytech, where both went to school as members of the same class of five students.  The ETH itself is a massive building with a huge plaza that overlooks the city from a promontory, meaning that when Albert and Mileva went to the Cafe Metropole on the Limmat River, they went down a steep grade and had to climb back up, later.  Their houses were each up the incline as well,  so they were both in decent physical condition. 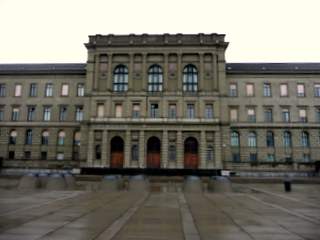 Today, Monday, I visited a tiny museum tucked back in the winding streets of the Alstadt (Old City) that showed a model of Zurich in 1800, before the ETH was built.  Of more interest were photographs of a 1910 house the city had renovated, which happened to look quite like the house where Mileva lived, including a rooftop room.  Renovation plans showed elevations of the interior, and there was a photograph of the interior of a renovated room with windows like in Mileva’s room and also of the original kitchen and common rooms before renovation.  It gave me a better sense of what the house looked like, including the areas where she and her friends met to play the piano and sing.  Albert played his violin for them there, with Mileva accompanying him.

Professionally-speaking, Nancy Pinard is an author-educator who spends her days writing, teaching, reading, and researching for her writing and teaching. She is the author of two published novels, Shadow Dancing and Butterfly Soup, and numerous short stories. She has taught the craft of fiction writing in many venues including Sinclair Community College, University of Dayton Life-Long Learning Institute, Antioch Writers' Workshop, Mad Anthony Writers' Workshop, and Molasses Pond Writers' Workshop. Personally, her faith is what sustains, inspires, and motivates her to continue to explore meaning through literature. "You are right in demanding that an artist approach his work consciously, but you are confusing two concepts: the solution of a problem and the correct formulation of a problem. Only the second is required of the artist."  Anton Chekov to Alexei Suvorin, October 27, 1888
View all posts by Nancy Pinard →
This entry was posted in ETH/Zurich Polytech, Fraumunster, Grossmunster, Marc Chagall, Plattenstrasse 50, Switzerland, Unionstrasse 4, Wasserkirche, Zurich. Bookmark the permalink.